To learn to play the piano! I sure hope this article link comes through for some if not all of adults considering lessons reading this blog post. Although it is about learning the cello, it applies to piano lessons, or studying any musical instrument.

Even I was so inspired by it. The number one question I get from folks calling, especially those who’ve retired, is “I’m ___, is it too late to start lessons?” Answer: No. To quote a commenter from this article, “It’s only too late when you’re dead.” I know. I just used that word in a supposedly upbeat blog post!

I also hear from adults calling, “I took lessons when I was a kid, but I don’t remember anything.” You may not, but your muscles do! Muscle memory is an amazing thing. Even including the muscle of sightreading!

But it is so true. With patience and practice, you will find the joy in learning no matter what your pace. Not only does it feel so wonderful, the accomplishment, of playing a song or piece you’ve learned, it also feels wonderful if not more so, to experience the process of learning.

OMG! On Google right now, Clara Rockmore playing the theremin! How totally cool. Check it out!

Wanna know more about the theremin? Go to my previous post and read all about it.
http://wp.me/p2ktnP-3h4

This is an article about a study done at the University of Austin to learn more about specific practice habits of piano majors—who were the best players and most effective learners. Really cool.

Granted this is a study with collegiate piano majors, but I think these findings are good tips for all of us, young and old alike!

Check out the top 8 strategies that led to the most success. (I also like the part about instilling kids with some sort of a work ethic that comes in handy in the future. Totally true.)

What I especially find interesting is the part about how many times the participants played the passage incorrectly: “the more times they played it incorrectly, the worse their ranking tended to be.”

“The researchers note that the most striking difference between the top three pianists and the rest, was how they handled mistakes.”

Great quote at the end of the article:

And this one is one of my favorites, I think about it a lot:

“Man has no nobler or more valuable possession than time.”
—Ludwig van Beethoven

Calling all parents, adult students, and anyone else who wants a great deal on basically a new piano!

(on loan to music dept for one year at Gordon, then they have the sale)

Gordon College is having their annual sale of Kawai pianos, which Kawai loans to music department for one year, then they have the sale. Two of my students have purchased a piano at these sales and they are very happy! They’re mainly Kawai pianos in brand-new condition, but there’s also other brands, new and used, incredible deals: read more about it here at the Gordon College Dept of Music site.

And be sure and tell them I sent you! 🙂

What! A post about metronomes? Ho Hum.
I gotta be honest, I’m not crazy about iPhone/iPad metronome apps only for ONE reason, they’re not loud enough unless you’re running them through speakers. That said, an 11-year-old student introduced me to a great metronome app she uses (when I make her!) on her iPad, best one I’ve seen:

And here’s a list of non-app, some perhaps are somewhat “antiquated” metronomes.

The Korg MA-30, the one I have in my studio. Still cool to kids cos it runs on batteries and has buttons to push.

The bad boy Franz (yes, you plug it in), mine lasted for years (I went through two of them I think) … in fact … sentimental packrat that I am, I still have the second one. It finally died, and I don’t have time to run around finding a clockmaker to fix and calibrate it.

The Wittner mini, had one of these in college, another great metronome, of the wind-up variety: 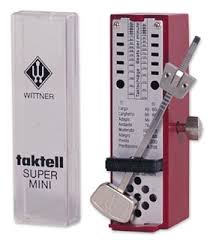 Call me old-fashioned but I still love these the best, the Seth Thomas wooden metronome, a throwback to the early 1800s (yup, patented by Johann Maelzel in 1815 (Hence, “M.M.” stands for “Maelzel Metronome” so when I write “m.m.” on your music you’ll know where the heck it comes from.) According to Wiki, Beethoven first used m.m. markings in his scores in 1817.

It’s nice and loud, the one I grew up with as a kid (actually, I think we had two, I broke the first one when I threw it across the room in frustration).

Feel free to share your thrilling metronome memories here too! 🙂

The Theremin! The who?

Yup, the theremin. The theremin was invented by Russian scientist Léon Theremin, in 1920. It is the world’s very first electronic instrument—what is unique about the theremin is that it’s an instrument you play without touching it; it remains the first and only non-contact instrument.

Here’s a clip of one of my students and me playing a free improvisation for piano and theremin:


To see the full version of our improv, go here:

Here’s a pic of the theremin I have, the Etherwave model made by Moog, that you can make from a kit: 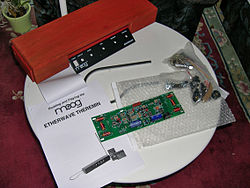 Today there are virtuoso thereminists, but not too many. (Students! if you learn to play the theremin like Clara, you’ll always have work … but don’t give up the piano!)

Here’s a video of arguably the best virtuoso thereminist who ever lived, Clara Rockmore, playing The Swan by Camille Saint-Saëns. She was Léon’s protégée.


And for you fans of the British mystery series, Midsomer Murders, yes, that’s a theremin you hear for the theme music, played by Celia Sheen:
If you want to know all about the theremin and its history, a fantastic documentary about the theremin and its inventor* is Theremin: An Electronic Odyssey. It’s a bit hard to rent now, not on Netflix or Amazon, but usually can be found in libraries and is for purchase new or used on Amazon. I have it (on VHS!) for any of my students interested in watching it! 🙂

*Cool fact: Léon was snatched up by the KGB from New York City, where he lived,  in 1938. The filmmaker of the documentary went to Russia to find him and bring him back to NYC, where he was reunited with Clara Rockmore, after more than 50 years, in 1991.

A bit advanced for beginner students—the first video starts with diatonic triads. But check it out, fun!
(The playlist is actually a good review for those of us rusty, say, on figured bass and secondary dominants.)

ideas about music, and about playing, learning and teaching the piano, with unexpected extras

A Brief History of Music

A Brief History of Music

Read about business mapping and how it can help your business succeed.